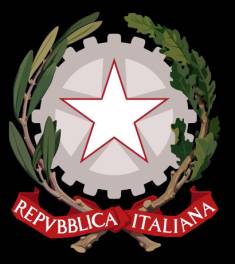 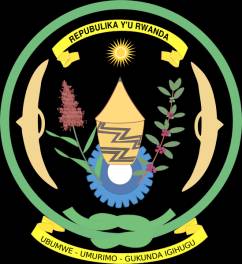 There are roads, during your lifetime, that will stay impressed in your memory like indelible ink. One of those is the road that from capital Kigali leads to Ruhuha, in the deep and poor Rwanda south, few steps away from Burundi's border.

I don't know how many times I went all over that road in small period of times; under the sun, the raining and the dust of the dirt. It's less than 50 km that tells the history of this Place, tortured by tribal genocide broken out between '92 and '94 and the following difficult rebuilding and, in parallel, tells my connection with these people and a deep friendship with a parish, but mainly a man, Pr Onesphore, a symbol of a lifestyle based on solidarity and kindness.

It's the third time that I go to these latitudes, both to savour the lively and pure african atmosphere and to live it thoroughly in close contact with daily situations: a football match, a drink of banana's liquor, a plate of goat skewers.......

Our group, composed by fourteen people, connected one each other by an adventure spirit and a strong selflessness in helping to specific projects, has created and started some works of great depth and meaning for the local population and not only.

During this travel I realize how three is the perfect number

first time you "touch" with a hand,

second one "take" by hand,

third one give into hand

Where "give" doesn't simply means touch the naked and cold money, but transmit your know how, you own ability to express and be useful in a multipurpose context. I saw my travelmates that offered their help in their own field of expertise: Anna and Giusy, the two nurseres, Maurizio surveyor, Ugo backsmith......

The phenomenon of "fatalism" in these areas is well established and it is very important, while respecting their cultures and traditions, conveying the right   amount of knowledge

Africa is like a toy in the hands of blind fate

I find my self one year later in a reality that has seen spending time at tribulations of every kind, and I return to Rwanda with a special atmosphere, with a sense of relief for my life: the opening and the consacration of a church dedicated to a dear friend, disappeared few days before that travel that would be the first one in Rwanda. 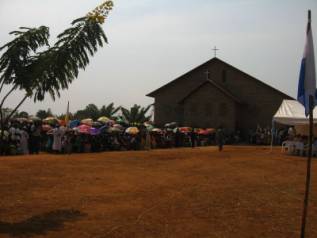 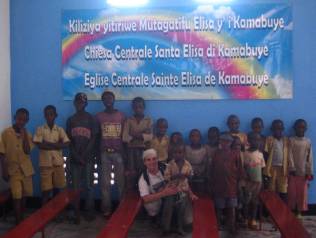 The happiness in seeing more than three thousand people crowded in the middle of a burning Friday if a rwandan August, rushed for this event, for me is immeasurable.

For them, is like receiving a second life, a second opportunity. It's very important to give, to people so fatalistic, a healthy dose of spirituality that could help them to exit from their stereotypes anded down from age to age by many generations

Among these personalities, there were: the archbishop of Kigali, several pastors of local churches and from neighboring Burundi, representatives of some politicians in high places Rwandan government, but also many common peoples. Furthermore, there have been celebrations of Mass weddings and baptisms.   Among the hosts there were Elisa's parents, to which the chuch is dedicated.

My eyes were filled with tears of joy in seeing all these people cheering and capable of making us feel at ease as if we were at home.

I do not forget also, on the famous axis of 50 km that connects Kigali to Ruhuha, our visits to the orphanage and the school of Nyamata Butereri.

I've been there, in that orphanage, several times, each of which I tried to see the improvements of the structure and organization, but, above all, give back a smile to twenty four children that come form the dusty streets of the district.

Forty eight eyes to look at the future full of life and twenty-four mouth to feed continuously every day.

With patience and good will, we went to the capital looking for: blankets, bedding,mosquito nets and in a blink of wings, we went back organizing the transport of the bedding over a bicycle, and the rest loaded in our minivan. It's a first step towards a restyling that will take shape with the construction of a new kitchen designed in place, that sill replace the dilapidated and obsolete one composed of four sheets metal put in flying cross by twine and rope 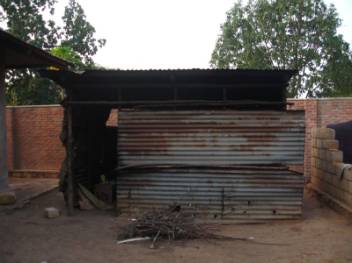 Then there is the Butereri's school, consisting of a complex of more classrooms, with barn, cisterns to collect water and room for the professors attached.

On my first visit there were only two classrooms used as first and second grade school and a third one under construction. At present, thanks to the efforts of all local and Italian friends, we came to six classrooms, a barn with two precious occupants with all fours legs, a room for teachers and, in short, a first cistern to collect rainwater for various uses 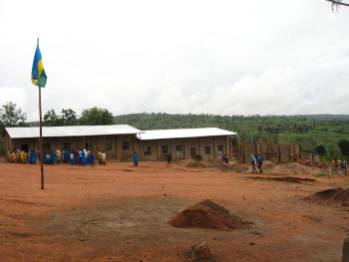 This trip represented for me more facets, each of which lived with intensity and different emotions.

In addition to projects of solidarity we have also dedicated time for fleeting visits to the lakes Cyohoha near Ruhuha and Muhazi to Rwesero north of Kigali.

Unforgettable also the drinking of beer and whiskey in the capital, walking in the middle of the savannah and the evenings in the moonlight in the park dell'Akagera, the impetuous waterfalls Rusumu Akagera fully formed from   the river on the border with Tanzania, the party for the centenary of the first Catholic church established in Rwanda Rulindo, meeting friends of the Argonauts in Kigali and to the one "Adventure into the world" in Ruhuha and many other exciting adventures. 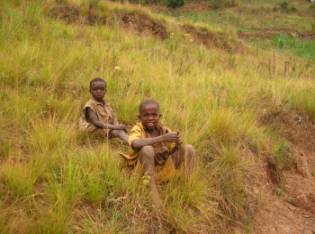 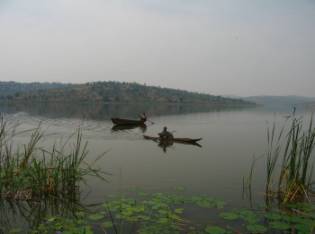 I'm satisfied with what has been done and will in the future, also deserve credit collaboration of all, working in synergy in close contact with the realities premises. Thanks largely to the support of Onesphore, the real engine of this perfect car !

Now this engine is at full capacity and had a new job, the management Rulindo Parish, the oldest in Rwanda. 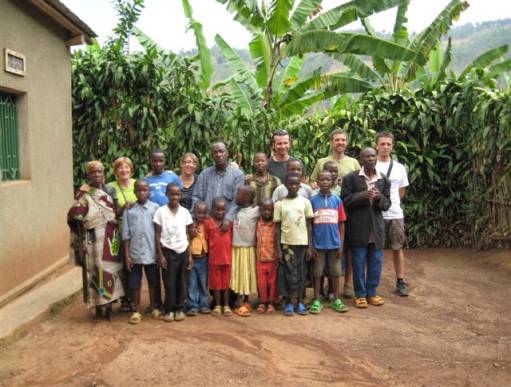 The phenomenon of fatalism in Africa

in Rwanda, as in the whole Africa, you have the feeling to perceive a behaviour of passive acceptance of the events, with so much resignation , without opposing any resistance to "fate", to destiny.

This kind of "collective unconscious", analytical psychology term coined by Carl Gustav Jung, is shared by all mankind and comes from their common ancestors. For Jung, essentially consists of objective, impersonal, innate, hereditary informations he called archetypes. the archetype, accordingly, becomes a kind of universal prototype for ideas through which the individual renders what he observes and experiences.

Unlike the personal unconscious, that comes directly from the personal individual experience, that collective is an instinctive common ancestral form of culture and expressed, in Africe, in a primitive form closely tied to the past.

The survival of the archetypes in modern times, is a symptom of the results of mass communication. This type of communication plays a major role in Africa and expresses a concept of progressive or weakening according to the spread in the territory. A successful film, a book, a widely followed television can play a role in revitalizing or weakening.

Another key role is played by education and scholarship that regulate the relationship between the collective and individual unconscious.They are, therefore, a point of debate between communitarianism and liberalism that concern ethical and political aspects of great importance.

This thought arises many questions to which is difficult to answer, unless digging into these forms of instinctive archetypes to which the multitude of the natives believe and pursue. 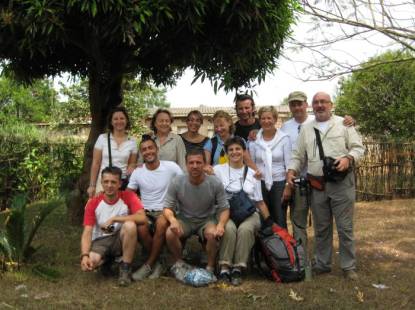